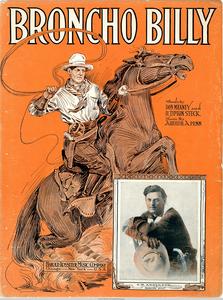 Western is a genre of fiction set primarily in the latter half of the 19th and early 20th century in the Western United States, which is styled the "Old West". Its stories commonly center on the life of a nomadic cowboy or gunfighter who rides a horse and is armed with a revolver and/or a rifle. Cowboys and gunslingers typically wear broad-brimmed and high-crowned Stetson hats, neckerchief bandannas, vests, spurs, cowboy boots, and buckskins (alternatively dusters). Recurring characters include the aforementioned cowboys, Indians, Spaniards, Mexicans, bandits, lawmen, prostitutes, bounty hunters, outlaws, gamblers, soldiers (especially mounted cavalry), and settlers (farmers, ranchers, and townsfolk). The ambience is usually punctuated with a Western music score, including American folk music and Spanish/Mexican folk music such as country, Native American music, New Mexico music, and rancheras. Westerns often stress the harshness of the wilderness and frequently set the action in an arid, desolate landscape of deserts and mountains. Often, the vast landscape plays an important role, presenting a "mythic vision of the plains and deserts of the American West." Specific settings include ranches, small frontier towns, saloons, railways, wilderness, and isolated military forts of the Wild West. Many Westerns use a stock plot of depicting a crime, then showing the pursuit of the wrongdoer, ending in revenge and retribution, which is often dispensed through a shootout or quick-draw duel.The Western has been recognized as the most popular Hollywood film genre from the 1930s through the 1960s. John Ford's landmark Western film Stagecoach (1939) became one of the biggest hits of that year, and made John Wayne a mainstream movie star. The popularity of Westerns continued to grow in the 1940s, with the release of films such as The Ox-Bow Incident (1943), My Darling Clementine (1946), Fort Apache (1948), and Red River (1948). The 1950s have been described as the golden age of the Western, an era which saw the release of films such as Broken Arrow (1950), High Noon (1952), Shane (1953), Wichita (1955), The Searchers (1956), and Rio Bravo (1959). Notable Western films released in the 1960s include Cat Ballou (1965), The Good, the Bad and the Ugly (1966), The Wild Bunch, and Butch Cassidy and the Sundance Kid (both 1969).Classic Westerns such as these have been the inspiration for various films about Western-type characters in contemporary settings, such as Junior Bonner (1972), set in the 1970s, and The Three Burials of Melquiades Estrada (2005), set in the 21st century.
Read more or edit on Wikipedia