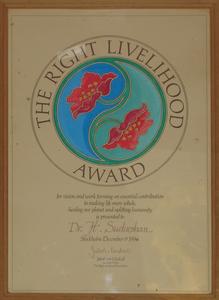 The Right Livelihood Award is an international award to "honour and support those offering practical and exemplary answers to the most urgent challenges facing us today." The prize was established in 1980 by German-Swedish philanthropist Jakob von Uexkull, and is presented annually in early December. An international jury, invited by the five regular Right Livelihood Award board members, decides the awards in such fields as environmental protection, human rights, sustainable development, health, education, and peace. The prize money is shared among the winners, usually numbering four, and is €200,000. Very often one of the four laureates receives an honorary award, which means that the other three share the prize money.Although it is promoted as an "Alternative Nobel Prize", it is not a Nobel prize (i.e., a prize created by Alfred Nobel). It does not have any organizational ties at all to the awarding institutions of the Nobel Prize or the Nobel Foundation, unlike the Nobel Memorial Prize in Economic Sciences, which is not technically a Nobel prize but is administered by the Nobel Foundation. However, the Right Livelihood Award is sometimes popularly associated with the Nobel prizes. The Right Livelihood Award committee arranged for awards to be made in the Riksdag of Sweden the day before the Nobel prizes and the economics prize are also awarded in Stockholm. However, the Right Livelihood Awards are understood as a critique of the traditional Nobel prizes. The establishment of the award followed a failed attempt to have the Nobel Foundation create new prizes in the areas of environmental protection, sustainable development and human rights. The prize has been awarded to a diverse group of people and organisations, including Wangari Maathai, Astrid Lindgren, Bianca Jagger, Mordechai Vanunu, Leopold Kohr, Arna Mer-Khamis, Felicia Langer, Petra Kelly, Survival International, Amy Goodman, Catherine Hamlin, Memorial, Edward Snowden, Daniel Ellsberg, and Greta Thunberg.
Read more or edit on Wikipedia