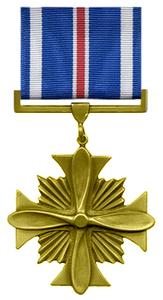 The Distinguished Flying Cross (DFC) is a military decoration of the United States Armed Forces. The medal was established on July 2, 1926, and is currently awarded to any persons who, after April 6, 1917, distinguish themselves by single acts of heroism or extraordinary achievement while participating in aerial flight. Both heroism and extraordinary achievement are entirely distinctive, involving operations that are not routine. The medal may be awarded to friendly foreign military members in ranks equivalent to U.S. Pay Grade of O-6 and below, in actual combat in support operations.
Read more or edit on Wikipedia