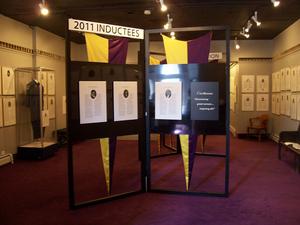 The National Women's Hall of Fame (NWHF) is an American institution created in 1969 by a group of men and women in Seneca Falls, New York. As of 2021, it had 303 inductees.Inductees are nominated by members of the public and selected by a National Panel of Judges on the basis of the changes they created that affect the social, economic or cultural aspects of society; the significant national or global impact and results of change due to their achievement; and the enduring value of their achievements or changes. Induction ceremonies are held every odd- numbered year in the fall, with the names of the women to be honored announced earlier in the spring, usually during March, Women's History Month.The NWHF is a private 501(c)(3) non-profit organization, with six employees as of 2021, funded by philanthropy, admissions, and other income. In July 2021, Jennifer Gabriel was named executive director.
Read more or edit on Wikipedia