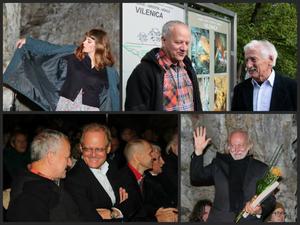 Vilenica International Literary Festival (Slovene: Mednarodni literarni festival Vilenica) is a festival dedicated to literature that was founded in 1986 in Slovenia. It takes place annually in several locations on the Karst Plateau in the Slovene Littoral, including inside Vilenica Cave. It is arranged by the Slovene Writers' Association together with the Cultural Centre Vilenica from Sežana. The highlight of the festival is the awarding of the Vilenica International Literary Prize to a Central European author for "outstanding achievements in the field of literature and essay writing."
Read more or edit on Wikipedia