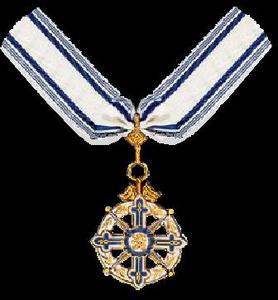 The Bavarian Maximilian Order for Science and Art (German: Bayerischer Maximiliansorden für Wissenschaft und Kunst) was first established on 28 November 1853 by King Maximilian II von Bayern. It is awarded to acknowledge and reward excellent and outstanding achievements in the field of science and art. From 1933 onwards (with the beginning of the Nazi regime) the order was no longer awarded, until 1980 when it was reinstated by the then Minister-President of the Free State of Bavaria Franz Josef Strauß. Munich jewellers Hemmerle have been responsible for making the medal since 1905.
Read more or edit on Wikipedia