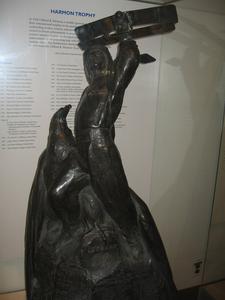 The Harmon Trophy is a set of three international trophies, to be awarded annually to the world's outstanding aviator, aviatrix, and aeronaut (balloon or dirigible). A fourth trophy, the "National Trophy," was awarded from 1926 through 1938 to the most outstanding aviator in each of the twenty-one member countries and again from 1946–1948 to honor Americans who contributed to aviation. The award was established in 1926 by Clifford B. Harmon, a wealthy balloonist and aviator. The awards are described by the Clifford B. Harmon Trust as: "American awards for the most outstanding international achievements in the arts and/or science of aeronautics for the preceding year, with the art of flying receiving first consideration."
Read more or edit on Wikipedia