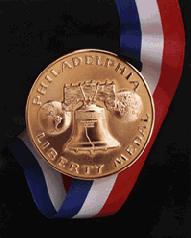 The Liberty Medal is an annual award administered by the National Constitution Center of the United States to recognize leadership in the pursuit of freedom. It was founded by the Philadelphia Foundation. In 2006 an agreement was made with the National Constitution Center (NCC) that the NCC would take over the organizing, selecting and presenting of the award to recipients. Recipients are now chosen by the NCC and its board of trustees.
Read more or edit on Wikipedia