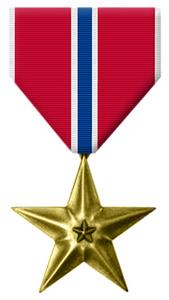 The Bronze Star Medal (BSM) is a United States Armed Forces decoration awarded to members of the United States Armed Forces for either heroic achievement, heroic service, meritorious achievement, or meritorious service in a combat zone. When the medal is awarded by the Army, Air Force, or Space Force for acts of valor in combat, the "V" device is authorized for wear on the medal. When the medal is awarded by the Navy, Marine Corps, or Coast Guard for acts of valor or meritorious service in combat, the Combat "V" is authorized for wear on the medal. Officers from the other Uniformed Services of the United States are eligible to receive this award, as are foreign soldiers who have served with or alongside a service branch of the United States Armed Forces.Civilians serving with U.S. military forces in combat are also eligible for the award. For example, UPI reporter Joe Galloway was awarded the Bronze Star with "V" device during the Vietnam War for rescuing a badly wounded soldier under fire in the Battle of Ia Drang, in 1965. Another civilian recipient was writer Ernest Hemingway.
Read more or edit on Wikipedia