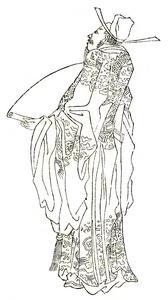 fictional character based on Di Renjie

Judge Dee, or Judge Di, is a semi-fictional character based on the historical figure Di Renjie, county magistrate and statesman of the Tang court. The character appeared in the 18th-century Chinese detective and gong'an crime novel Di Gong An. After Robert van Gulik came across it in an antiquarian book store in Tokyo, he translated the novel into English and then used the style and characters to write his own original Judge Dee historical mystery stories. The series is set in Tang Dynasty China and deals with criminal cases solved by the upright and shrewd Judge Dee, who as county magistrate in the Chinese imperial legal system was both the investigating magistrate and judge.
Read more or edit on Wikipedia