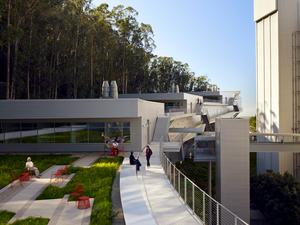 The University of California, San Francisco (UCSF) is a public land-grant research university in San Francisco, California. It is part of the University of California system and it is dedicated entirely to health science. It is a major center of medical and biological research and teaching.UCSF was founded as Toland Medical College in 1864, and in 1873 it affiliated itself with the University of California, becoming its Medical Department. In the same year, it incorporated the California College of Pharmacy and in 1881 it established a dentistry school. Its facilities were located in both Berkeley and San Francisco. In 1964, the school gained full administrative independence as a campus of the UC system headed by a chancellor, and in 1970 it gained its current name. Historically based at Parnassus Heights and several other locations throughout the city, in the early 2000s it developed a second major campus in the newly redeveloped Mission Bay. As of October 2021, thirteen Nobel laureates have been affiliated with UCSF as faculty members or researchers, and the University has been the site of many scientific breakthroughs.UCSF is considered one of the world's preeminent medical and life sciences universities. The professional schools of the University of California, San Francisco are among the top in the nation, according to current U.S. News & World Report graduate school and other rankings. The schools also rank at or near the top in research funding from the National Institutes of Health. As of 2021-22 U.S. News & World Report, UCSF Medical Center is the third best hospital in the state of California and the 9th best in the nation. Among U.S. medical schools, UCSF is ranked 4th for research and ranked 2nd for clinical training in the primary care specialties (internal medicine, family medicine, and pediatrics) by U.S. News and World Report. In 2019, UCSF was ranked number six for biomedical sciences in the Nature Index, which measured the largest contributors to papers published in leading journals from 2015 to 2018.With 25,398 employees, UCSF is the second-largest public agency employer in the San Francisco Bay Area. UCSF faculty have treated patients and trained residents since 1873 at the San Francisco General Hospital and for over 50 years at the San Francisco VA Medical Center.
Read more or edit on Wikipedia