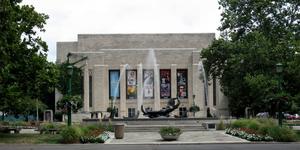 Indiana University Bloomington (IU Bloomington, IU, or simply Indiana) is a public research university in Bloomington, Indiana. It is the flagship campus of the Indiana University and, with over 40,000 students, its largest campus.Indiana University is a member of the Association of American Universities and is classified among "R1: Doctoral Universities – Very high research activity". It has numerous schools and programs, including the Jacobs School of Music, the Luddy School of Informatics, Computing, and Engineering, the O'Neill School of Public and Environmental Affairs, the Kelley School of Business, the School of Public Health, the School of Nursing, the School of Optometry, the Maurer School of Law, the School of Education, the Media School, and the Hamilton Lugar School of Global and International Studies.As of Fall 2017, 43,710 students attend Indiana University. While 55.1% of the student body was from Indiana, students from all 50 states, Washington, D.C., Puerto Rico and 165 countries were also enrolled. As of 2018, the average ACT score is a 28 and an SAT score of 1276. The university is home to an extensive student life program, with more than 750 student organizations on campus and with around 17 percent of undergraduates joining the Greek system. Indiana athletic teams compete in Division I of the NCAA and are known as the Indiana Hoosiers. The university is a member of the Big Ten Conference; since it does not have a mascot, all teams are known simply as "Hoosiers". Indiana's faculty, staff, and alumni include nine Nobel laureates, 17 Rhodes Scholars, 17 Marshall Scholars, and five MacArthur Fellows. In addition, students and alumni have won six Academy Awards, 49 Grammy Awards, 32 Emmy Awards, 20 Pulitzer Prizes, four Tony Awards, and 95 Olympic medals (51 gold, 21 silver, and 23 bronze).
Read more or edit on Wikipedia