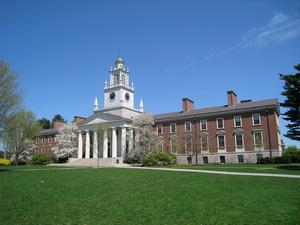 Phillips Academy Andover (also known as Andover or PA) is a co-educational university-preparatory school for boarding and day students in grades 9–12, along with a post-graduate (PG) year. The school is in Andover, Massachusetts, United States, 25 miles north of Boston. Phillips Academy has 1,131 students, and is a highly selective school, accepting 13% of applicants with a yield as high as 86% (in 2017). It is part of the Eight Schools Association and the Ten Schools Admissions Organization, as well as the G30 Schools Group. Founded in 1778, Andover is one of the oldest incorporated secondary schools in the United States. It has educated a long list of notable alumni through its history, including American presidents George H. W. Bush and George W. Bush, foreign heads of state, numerous members of Congress, five Nobel laureates and six Medal of Honor recipients. It has been referred to by many contemporary sources as the most elite boarding school in America.It turned coeducational in 1973, the year in which it merged with its neighbor girls school Abbot Academy.
Read more or edit on Wikipedia