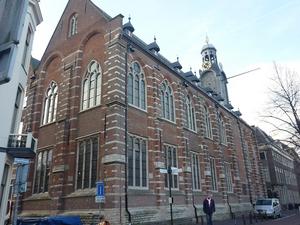 Leiden University (abbreviated as LEI; Dutch: Universiteit Leiden) is a public research university in Leiden, Netherlands. Founded in 1575 by William, Prince of Orange as a reward to the city of Leiden for its defense against Spanish attacks during the Eighty Years' War, it is the oldest institution of higher education in the Netherlands, as well as one of the most reputed.Known for its historic foundations and emphasis on the social sciences, the university came into particular prominence during the Dutch Golden Age, when scholars from around Europe were attracted to the Dutch Republic due to its climate of intellectual tolerance and Leiden's international reputation. During this time, Leiden became the home to individuals such as René Descartes, Rembrandt, Christiaan Huygens, Hugo Grotius, Baruch Spinoza and Baron d'Holbach. The university has seven academic faculties and over fifty subject departments while housing more than 40 national and international research institutes. Its historical primary campus consists of buildings scattered across the college town of Leiden, while a second campus located in The Hague houses a liberal arts college and several of its faculties. It is a member of the Coimbra Group, the Europaeum, and a founding member of the League of European Research Universities. Leiden University consistently ranks among the top 100 universities in the world by prominent international ranking tables. It was placed top 50 worldwide in thirteen fields of study in the 2020 QS World University Rankings: classics & ancient history, politics, archaeology, anthropology, history, pharmacology, law, public policy, public administration, religious studies, arts & humanities, linguistics, modern languages and sociology.The university has produced twenty-one Spinoza Prize Laureates and sixteen Nobel Laureates, including Enrico Fermi and Albert Einstein. It is closely associated with the Dutch royal family, with Queen Juliana, Queen Beatrix and King Willem-Alexander being alumni. Ten prime ministers of the Netherlands are also alumni, including incumbent Prime Minister Mark Rutte. Internationally, Leiden University is associated with several leaders, including a President of the United States, two NATO secretaries general, a president of the International Court of Justice and a Prime Minister of the United Kingdom.
Read more or edit on Wikipedia