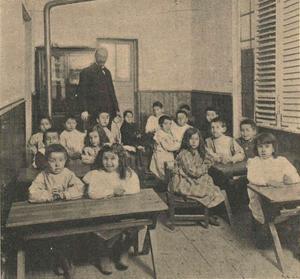 La Institución Libre de Enseñanza (ILE, English: The Free Institution of Education), was an educational project developed in Spain for over half a century (1876–1936). The institute was inspired by the philosophy of Krausism, first introduced to the Complutense University of Madrid by Julián Sanz del Río, and which, despite being subsequently ejected from that university, was to have a significant impact on intellectual life in Restoration Spain. The institution was founded in 1876 by a group of disaffected university professors, including Francisco Giner de los Ríos, Gumersindo Azcarate, Teodoro Sainz Rueda and Nicolás Salmerón, who distanced themselves from the main university campus in Madrid to achieve academic freedom. They declined to adjust their teaching to any official religious dogma or the moral and political imposition of the time. Consequently, they had to continue their educational work outside the state sector by creating a secular private educational institution, starting with university level instruction and later extending their activities to primary and secondary education. They supported and seconded the intellectual ideas of Joaquín Costa, Leopoldo Alas (Clarín), José Ortega y Gasset, Gregorio Marañón, Ramón Menéndez Pidal, Antonio Machado, Joaquín Sorolla, Augusto González Linares, Santiago Ramón y Cajal and Federico Rubio, among others involved in educational, cultural and social renewal.
Read more or edit on Wikipedia