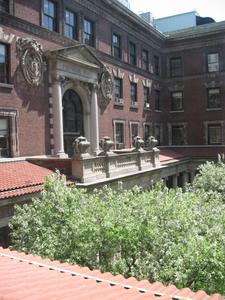 Barnard College of Columbia University is a private women's liberal arts college in New York City. It was founded in 1889 by Annie Nathan Meyer as a response to Columbia University's refusal to admit women and is named after Columbia's 10th president, Frederick Barnard. Barnard is one of four undergraduate colleges of Columbia University but has legal and financial autonomy. Students share classes, clubs, fraternities and sororities, sports teams, buildings, and more with Columbia, and receive a Columbia diploma that is signed by both Barnard and Columbia presidents. Barnard offers Bachelor of Arts degree programs in about 50 areas of study. Students may also pursue elements of their education at Columbia, the Juilliard School, the Manhattan School of Music, and The Jewish Theological Seminary, which are also based in New York City. Its 4-acre (1.6 ha) campus is located in the Upper Manhattan neighborhood of Morningside Heights, stretching along Broadway between 116th and 120th Streets. It is directly across from Columbia's main campus and near several other academic institutions. The college is a member of the Seven Sisters, an association of seven prominent women's liberal arts colleges in the United States of America.
Read more or edit on Wikipedia