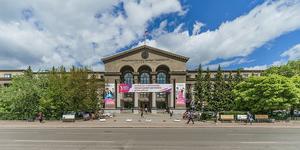 The Ural State University (Russian: Урáльский госудáрственный университéт и́мени А.М. Гóрького, Urál'skiy gosudárstvennyy universitét ímeni A. M. Gór'kogo, often shortened to USU, УрГУ) is a public university located in the city of Yekaterinburg, Sverdlovsk Oblast, Russian Federation. Founded in 1920, it was an exclusive educational establishment made of several institutes (educational and scientific divisions) which later became independent universities and schools. Established in 1936 the University was named after one of its founders, Russian author Maxim Gorky. It is the second oldest University in the Middle Urals (the oldest being Urals State University of Mines) and one of the most prestigious universities in Russia; preparing research, educational and managerial elite on the basis of the integration of academic process and scientific research. It offers education in dozens of scientific and educational fields including 53 graduate programs. In 2007 Dmitriy Bugrov was elected new rector, while the incumbent Vladimir Tretyakov took the office of the President, representing the University in international affairs. The USU is organized into 95 chairs and 14 departments. These are Biology, Journalism, Culturology & Arts, History, Mathematics and Mechanics, Politology and Sociology, Psychology, Physics, Philology, Philosophy, Public relations, Chemistry, Foreign affairs, and Economics. Among the University's faculty there are 18 academicians of the Russian Academy of Sciences. The University also has a Lyceum, the Leonardo Italian College, an Institute of Physics and Applied Mathematics, an Interregional Institute of Social Sciences, the Russian-American Institute of Economy and Business, the Institute of Management and Entrepreneurship, a distance education center, the Russian Culture Institute, an observatory, a botanical garden, a scientific library with over 1,200,000 volumes, a publishing house, several museums, a special chair of Russian as foreign language, a laboratory for e-learning of foreign languages, and offers refresher courses and Institutes for Further Education and Training. Every year the Ural State University hosts the Demidov Lectures - a series of lectures given by the Demidov Prize winners. Since 2010, the University has been The Ural Federal university after Boris Yeltsin. It was caused by the Russian Federation's President's decree #1172 from 21.10.2010. The University is now joint with The Ural State Technical University.
Read more or edit on Wikipedia