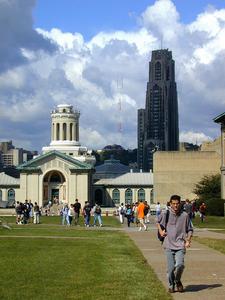 Carnegie Mellon University (CMU) is a private research university based in Pittsburgh, Pennsylvania. Founded in 1900, the university is a merger of the Carnegie Institute of Technology and the Mellon Institute of Industrial Research. The university was established by Andrew Carnegie as the Carnegie Technical Schools, the university became the Carnegie Institute of Technology in 1912 and began granting four-year degrees. In 1967, the Carnegie Institute of Technology merged with the Mellon Institute of Industrial Research, formerly a part of the University of Pittsburgh. Since then, the university has operated as a single institution. The university has seven colleges and independent schools, including the College of Engineering, College of Fine Arts, Dietrich College of Humanities and Social Sciences, Mellon College of Science, Tepper School of Business, Heinz College of Information Systems and Public Policy, and the School of Computer Science. The university has its main campus located 3 miles (5 km) from Downtown Pittsburgh, and the university also has over a dozen degree-granting locations in six continents, including degree-granting campuses in Qatar and Silicon Valley.Past and present faculty and alumni include 20 Nobel Prize laureates, 13 Turing Award winners, 23 Members of the American Academy of Arts and Sciences, 22 Fellows of the American Association for the Advancement of Science, 79 Members of the National Academies, 124 Emmy Award winners, 47 Tony Award laureates, and 10 Academy Award winners. Carnegie Mellon enrolls 14,799 students from 117 countries and employs 1,400 faculty members.
Read more or edit on Wikipedia