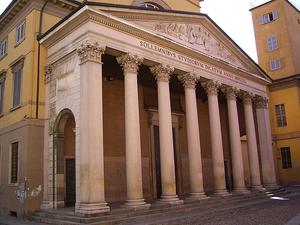 The University of Pavia (Italian: Università degli Studi di Pavia, UNIPV or Università di Pavia; Latin: Alma Ticinensis Universitas) is a university located in Pavia, Lombardy, Italy. There was evidence of teaching as early as 1361, making it one of the oldest universities in the world. It was the sole university in Milan and the greater Lombardy region until the end of the 19th century.Currently, it has 18 departments and 9 faculties. It doesn't have a main campus, its buildings and facilities are scattered around the city, earning the city of Pavia its title "a city campus". The university caters to more than 20,000 students who come from Italy and all over the world. The university offers more than 80 undergraduate programs, more than 40 master programs and about 20 doctoral programs, including 8 English programs. About 1,500 students who enter the university every year are international students.The university operates multiple cultural and scientific museums, including the University History Museum, a botanical garden, research centers, university libraries and a university press. The university is also affiliated with Policlinico San Matteo, where every year, hundreds of medical students from the university perform clinical rotations during their clinical years. The University of Pavia is a member of the COIMBRA Group and European University Association. It also participates in the Erasmus Programme, which allows student exchanges between the University of Pavia and various universities in Europe.
Read more or edit on Wikipedia