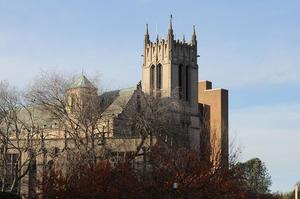 The University of Washington (UW, simply Washington, or informally U-Dub) is a public research university in Seattle, Washington. Founded in 1861, Washington is one of the oldest universities on the West Coast; it was established in Seattle approximately a decade after the city's founding to aid its economic development. Today, the university's 703 acre main Seattle campus is in the University District, Puget Sound region of the Pacific Northwest. The university also has campuses in Tacoma and Bothell. Overall, UW encompasses over 500 buildings and over 20 million gross square footage of space, including one of the largest library systems in the world with more than 26 university libraries, as well as the UW Tower, lecture halls, art centers, museums, laboratories, stadiums, and conference centers. The university offers degrees through 140 departments in various colleges and schools, and functions on a quarter system. Washington is a member of the Association of American Universities and is classified among "R1: Doctoral Universities – Very high research activity". According to the National Science Foundation, UW spent $1.41 billion on research and development in 2018, ranking it 5th in the nation. As the flagship institution of the six public universities in Washington state, it is known for its medical, engineering and scientific research as well as its extremely competitive computer science, engineering, law, architecture and business school. Additionally, Washington continues to benefit from its deep historic ties and major collaborations with numerous technology giants in the region, such as Amazon, Boeing, Nintendo, and particularly Microsoft. Paul G. Allen, Bill Gates and others spent significant time at Washington computer labs for a startup venture before founding Microsoft and other ventures. The UW's 22 varsity sports teams are also highly competitive, competing as the Huskies in the Pac-12 Conference of the NCAA Division I, representing the United States at the Olympic Games, and other major competitions.The university has been affiliated with many notable alumni and faculty, including 21 Nobel Prize laureates and numerous Pulitzer Prize winners, Fulbright Scholars, Rhodes Scholars and Marshall Scholars.
Read more or edit on Wikipedia