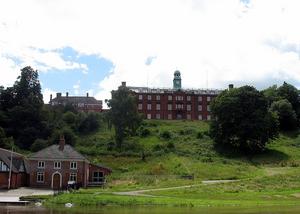 Shrewsbury School is a public school (English independent boarding school for pupils aged 13 –18) in Shrewsbury. Founded in 1552 by Edward VI by Royal Charter, it is one of the seven public schools subject to the Public Schools Act 1868, and one of the nine prestigious schools investigated by the Clarendon Commission between 1861 and 1864.It was originally a boarding school for boys; girls have been admitted into the Sixth Form since 2008 and the school has been co-educational since 2015. There are approximately 130 day pupils. The present site, to which the school moved in 1882, is on the south bank of the River Severn.
Read more or edit on Wikipedia