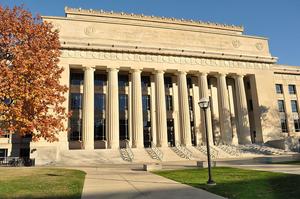 The University of Michigan (Michigan, or UMich) is a public research university in Ann Arbor, Michigan. Founded in 1817 by an act of the old Michigan Territory, as the Catholepistemiad, or the University of Michigania, 20 years before the territory became a state, the university is Michigan's oldest. The institution was moved to Ann Arbor in 1837 onto 40 acres (16 ha) of what is now known as Central Campus, a U.S. historic district. Since its establishment in Ann Arbor, the university has expanded to include some 500 buildings spread out over the city. The university has been governed by an elected board of regents independently of the state since 1850, when the state's second constitution was officially adopted. The university consists of nineteen colleges and offers degree programs at undergraduate, graduate and postdoctoral levels in some 250 disciplines. Michigan has ten professional schools: the Taubman College of Architecture and Urban Planning, the Ross School of Business, the Medical School, the Law School, the Ford School of Public Policy, the College of Pharmacy, the School of Social Work, the School of Public Health, and the School of Dentistry. It affiliates with two regional universities (satellite campuses) in Flint and Dearborn (each separately accredited universities), and a Center in Detroit. Michigan has been a coeducational institution since 1871. The university's enrollment is approximately 32,000 undergraduate students and 16,000 graduate students. Undergraduate admission to the university is categorized as "most selective." Nearly half of the students are from out of state. International students from some 130 countries account for 5 percent of the entire student body. In 2021, Michigan's six-year graduation rate was 93 percent.Michigan is one of the earliest American research universities, part of the URA, as well as a founding member of the Association of American Universities. It is classified among "R1: Doctoral Universities – Very high research activity". It has been consistently ranked among the top universities in the United States by college and university rankings. In international comparison, the university occupies top positions in rankings and enjoys a high academic reputation. The university's noted alumni include eight domestic and foreign heads of state or heads of government; 42 cabinet-level officials; and 26 living billionaires. At $17 billion in 2021, Michigan's endowment is among the largest of any public university.As of October 2019, 26 Nobel Prize winners, 53 MacArthur "genius award" winners (29 alumni winners and 24 faculty winners), six Turing Award winners, one Fields Medalist and one Mitchell Scholar have been affiliated with the university. It also has many alumni who are Fulbright Scholars. As of 2021, Wolverine athletes have won 155 medals at the Olympic Games.
Read more or edit on Wikipedia