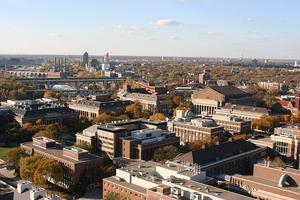 The University of Minnesota, Twin Cities (UMN, the U of M, or Minnesota) is a public land-grant research university in the Twin Cities of Minneapolis and Saint Paul, Minnesota. The Twin Cities campus comprises locations in Minneapolis and Falcon Heights, a suburb of St. Paul, approximately 3 miles (4.8 km) apart. The Twin Cities campus is the oldest and largest in the University of Minnesota system and has the ninth-largest main campus student body in the United States, with 52,376 students at the start of the 2021–22 academic year. It is the flagship institution of the University of Minnesota System, and is organized into 19 colleges, schools, and other major academic units. The Minnesota Territorial Legislature drafted a charter for the U of M as a territorial university in 1851, seven years before Minnesota became a state. Today, the university is classified among "R1: Doctoral Universities – Very high research activity". Minnesota is a member of the Association of American Universities and is ranked 20th in research activity, with $1.04 billion in research and development expenditures in the fiscal year 2020. In 2001, the University of Minnesota was included in a list of Public Ivy universities, which includes publicly funded universities thought to provide a quality of education comparable to that of the Ivy League.University of Minnesota faculty, alumni, and researchers have won 26 Nobel Prizes and three Pulitzer Prizes. Among its alumni, the university counts 25 Rhodes Scholars, seven Marshall Scholars, 21 Truman Scholars, and 134 Fulbright recipients. The university also has Guggenheim Fellowship, Carnegie Fellowship, and MacArthur Fellowship holders, as well as past and present graduates and faculty belonging to the American Academy of Arts and Sciences, National Academy of Sciences, National Academy of Medicine, and National Academy of Engineering. Notable University of Minnesota alumni include two vice presidents of the United States, Hubert Humphrey and Walter Mondale, and Bob Dylan, who received the 2016 Nobel Prize in Literature.The Minnesota Golden Gophers compete in 21 intercollegiate sports in the NCAA Division I Big Ten Conference and have won 29 national championships. As of 2021, Minnesota's current and former students have won a total of 76 Olympic medals.
Read more or edit on Wikipedia