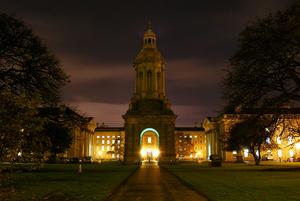 constituent college of the University of Dublin in Ireland

Trinity College (Irish: Coláiste na Tríonóide), officially the College of the Holy and Undivided Trinity of Queen Elizabeth near Dublin, is the sole constituent college of the University of Dublin, a research university in Dublin, Ireland. Queen Elizabeth I founded the college in 1592 as "the mother of a university" that was modelled after the collegiate universities of Oxford and Cambridge, but unlike these affiliated institutions, only one college was ever established; as such, the designations "Trinity College" and "University of Dublin" are usually synonymous for practical purposes. The college is legally incorporated by "the Provost, Fellows, Foundation Scholars and other members of the Board," as outlined by its founding charter. It is one of the seven ancient universities of Britain and Ireland, as well as Ireland's oldest surviving university. The university campus has been ranked among the most iconic in the world, and has been the setting for a number of novels, films and urban legends.Trinity College is widely considered one of Europe's elite universities, in part due to its historical significance. Academically, it is divided into three faculties comprising 23 schools, offering degree and diploma courses at both undergraduate and postgraduate levels. The admission procedure is based exclusively on academic merit. The college is particularly acclaimed in law, literature and humanities. It also carries out extensive research in nanotechnology, information technology, immunology, mathematics, engineering, psychology, politics and English. Trinity College is a sister college to St John's College, Cambridge and Oriel College, Oxford, and by incorporation, a graduate of Dublin, Oxford or Cambridge can be conferred the equivalent degree at either of the other two without further examination.Trinity College was originally established outside the city walls of Dublin in the buildings of the outlawed Catholic Augustinian Priory of All Hallows. Trinity was set up in part to consolidate the rule of the Tudor monarchy in Ireland, and as a result was the university of the Protestant Ascendancy for much of its history. While Catholics were admitted from 1793, certain restrictions on membership of the college remained, as professorships, fellowships and scholarships were reserved for Protestants. An 1873 Act of Parliament lifted these restrictions. While Catholics were not formally banned from attending Trinity at that time, Ireland's Catholic hierarchy discouraged it. Women were first admitted to the college as full members in 1904.The Library of Trinity College is a legal deposit library for Ireland and Great Britain, containing around 7 million printed volumes and significant quantities of manuscripts, including the Book of Kells, which arrived at the college in 1661 for safekeeping after the Cromwellian raids on religious institutions. The collection housed in the Long Room includes a rare copy of the 1916 Proclamation of the Irish Republic and a 15th-century wooden harp, which is the model for the current emblem of Ireland. The library receives more than 500,000 visitors per year, making it the most important in Ireland.The university has educated many of Ireland's most successful poets, playwrights and authors, including Oscar Wilde, Jonathan Swift, Bram Stoker, Percy French, William Trevor, Oliver Goldsmith and William Congreve, Nobel Laureates Samuel Beckett, Ernest Walton, Mairead Maguire and William Cecil Campbell, former Presidents of Ireland Mary McAleese, Douglas Hyde and Mary Robinson, philosophers George Berkeley and Edmund Burke, politician David Norris and mathematician William Rowan Hamilton. Trinity College was ranked 43rd in the world by the QS World University Rankings in 2009 and currently ranks 101st in the world and 1st in Ireland.
Read more or edit on Wikipedia