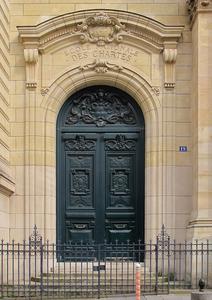 The École Nationale des Chartes (French: École nationale des chartes, literally National School of Charters) is a French grande école and a constituent college of Université PSL, specialising in the historical sciences. It was founded in 1821, and was located initially at the National Archives, and later at the Palais de la Sorbonne (5th arrondissement). In October 2014, it moved to 65 rue de Richelieu, opposite the Richelieu-Louvois site of the National Library of France. The school is administered by the Ministry of National Education, Higher Education and Research. It holds the status of a grand établissement. Its students, who are recruited by competitive examination and hold the status of trainee civil servant, receive the qualification of archivist-paleographer after completing a thesis. They generally go on to pursue careers as heritage curators in the archive and visual fields, as library curators or as lecturers and researchers in the human and social sciences. In 2005, the school also introduced master's degrees, for which students were recruited based on an application file, and, in 2011, doctorates.
Read more or edit on Wikipedia