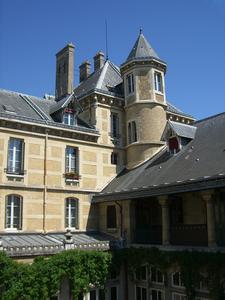 The Lycée Buffon is a secondary school in the XVe arrondissement of Paris, bordered by boulevard Pasteur, the rue de Vaugirard and the rue de Staël. Its nearest métro station is Pasteur. It is named for Georges-Louis Leclerc, comte de Buffon. Jean-Claude Durand is its current proviseur. It is a "cité scolaire" made up of a collège, a lycée and scientific classes préparatoires. It has 2 000 students, served by 170 professors, 4 "conseillers principaux d'éducation" and 50 other teaching personnel. It also houses an adult education centre for those taking the BTS and the Licence des métiers de l'immobilier, and a UPI, the only one in Paris for the visually impaired. The young visually impaired students can then integrate into classical education. The religious scholar Odon Vallet studied here, and its teachers have included the philosopher and journalist Maurice Clavel, the theatre critic and historian Gilles Sandié, and the writer and cineaste Jean Pelgri. The school's sundial can be seen on an exterior wall on rue de Vaugirard.
Read more or edit on Wikipedia