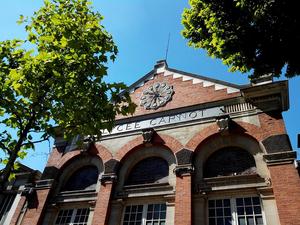 The Lycée Carnot is a public secondary and higher education school at 145 Boulevard Malesherbes in the 17th arrondissement, Paris, France. The Lycée Carnot was founded in 1869, first bearing the name of École Monge and then renamed in 1895. Some of its former students have been among the most-influential personalities in the country, including Jacques Chirac, the former French President, and Pascal Lamy, the former president of the World Trade Organization since (2005–2013). The Orthodox theologian Fr. Alexander Schmemann attended the school. Daft Punk musicians Thomas Bangalter and Guy-Manuel de Homem-Christo met there in 1987. The poet Louis Aragon also attended Carnot. The Lycée has served as a filming location for many films, and often hosts fashion shows during Paris fashion week. The heart of the building is a large hall measuring 80 by 30 meters covered with a glass roof mounted on a metal frame on a project by Gustave Eiffel. The Lycée Carnot has a middle school section and a high school section. There are also preparatory classes for grandes écoles, in economic and commercial sections as well as in sciences.
Read more or edit on Wikipedia