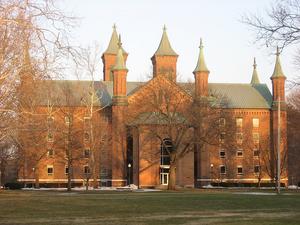 Antioch College is a private liberal arts college in Yellow Springs, Ohio. Founded in 1850 by the Christian Connection, the college began operating in 1852 as a non-sectarian institution; politician and education reformer Horace Mann was its first president. The college has been politically liberal and reformist since its inception. It was the third college in the country to admit African-American students on an equal basis with whites. It has had a tumultuous financial and corporative history, closing repeatedly, for years at a time, until new funding was assembled. Antioch College began opening new campuses in 1964, when it purchased the Putney School of Education in Vermont. Eventually it opened over 38 different campuses, and in 1978 it changed its name to Antioch University. While most of the university's campuses focused on adult education, graduate programs, and degree completion, Antioch College remained a traditional undergraduate institution on the original campus. In 2008, the university closed the college, but it reopened under new management in 2011 after a group of alumni formed the Antioch College Continuation Corporation and bought from the university both the physical campus and the right to use the name "Antioch College." Antioch is one of only a few liberal arts institutions in the United States featuring a cooperative education work program mandatory for all students. Democracy and shared governance, especially as a means to activism and social justice, are at the heart of the college. Since 1921 Antioch's educational approach has blended practical work experience with classroom learning, and participatory community governance. Students receive narrative evaluations and academic letter grades. Antioch College is a member of the Great Lakes Colleges Association, the Global Liberal Arts Alliance, and the Strategic Ohio Council for Higher Education. The college has produced two Nobel Prize winners, José Ramos-Horta and Mario Capecchi.
Read more or edit on Wikipedia