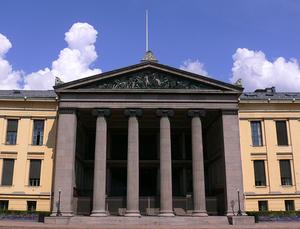 The University of Oslo (Norwegian: Universitetet i Oslo; Latin: Universitas Osloensis) is a public research university located in Oslo, Norway. It is the oldest university in Norway. The Academic Ranking of World Universities ranked it the 58th best university in the world and the third best in the Nordic countries. In 2016, the Times Higher Education World University Rankings listed the university at 63rd, making it the highest ranked Norwegian university.Until 1 January 2016 it was the largest Norwegian institution of higher education in terms of size, now surpassed only by the Norwegian University of Science and Technology. The university has approximately 27,700 students and employs around 6,000 people. Its faculties include (Lutheran) theology (with the Lutheran Church of Norway having been Norway's state church since 1536), law, medicine, humanities, mathematics, natural sciences, social sciences, dentistry, and education. The university's original neoclassical campus is located in the centre of Oslo; it is currently occupied by the Faculty of Law. Most of the university's other faculties are located at the newer Blindern campus in the suburban West End. The Faculty of Medicine is split between several university hospitals in the Oslo area. The university also includes some formally independent, affiliated institutes such as the Centre for International Climate and Environmental Research (CICERO), NKVTS and the Frisch Centre. The university was founded in 1811 and was modeled after the University of Copenhagen and the recently established University of Berlin. It was originally named for King Frederick VI of Denmark and Norway, and received its current name in 1939. The university is informally also known as Universitetet ("the university"), having been the only university in Norway, until 1946 and was commonly termed "The Royal Frederick's" (Det Kgl. Frederiks), before the name change. The Nobel Peace Prize was awarded in the university's Atrium, from 1947 to 1989 and will be so again in 2020, making it the only university in the world to be involved in awarding a Nobel Prize. Since 2003, the Abel Prize is awarded in the Atrium. Five researchers affiliated with the university have been Nobel laureates and three have been Turing Award winners.
Read more or edit on Wikipedia