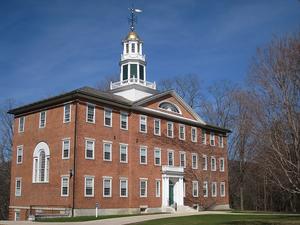 Williams College is a private liberal arts college in Williamstown, Massachusetts. It was established as a men's college in 1793 with funds from the estate of Ephraim Williams, a colonist from the Province of Massachusetts Bay who was killed in the French and Indian War in 1755. It is the second-oldest institution of higher education in the Commonwealth of Massachusetts after Harvard College. Although the bequest from the estate of Ephraim Williams intended to establish a "free school", the exact meaning of which is ambiguous, the college quickly outgrew its initial ambitions. It positioned itself as a "Western counterpart" to Yale and Harvard. It became officially coeducational in the 1960s. Williams's main campus is located in Williamstown, in the Berkshires in rural northwestern Massachusetts, and contains more than 100 academic, athletic, and residential buildings. There are 357 voting faculty members, with a student-to-faculty ratio of 7:1. As of 2021, the school has an enrollment of 1,962 undergraduate students and 25 graduate students.Following a liberal arts curriculum, Williams College provides undergraduate instruction in 25 academic departments and interdisciplinary programs including 36 majors in the humanities, arts, social sciences, and natural sciences. Williams offers an almost entirely undergraduate instruction, though there are two graduate programs in development economics and art history. The college maintains affiliations with the nearby Clark Art Institute and Massachusetts Museum of Contemporary Art, and has a close relationship with Exeter College, Oxford University. The college competes in the NCAA Division III New England Small College Athletic Conference as the Ephs. The athletic program has been highly successful, as Williams College has won 22 of the last 24 College Directors' Cups for NCAA Division III.Williams is a highly selective school with an acceptance rate of 8% for the Class of 2025. It has ranked first in U.S. News & World Report's rankings of National Liberal Arts Colleges every year since 2004, and the college has held high-ranking positions in other institutional rankings. The college has many prominent alumni, including 9 Pulitzer Prize winners, a Nobel Prize Laureate, a Fields medalist, 3 chairmen of the U.S. Securities and Exchange Commission, a chairwoman of the Federal Trade Commission, 14 billionaire alumni, 71 members of the United States Congress, 22 U.S. Governors, 4 U.S. Cabinet secretaries, an Associate Justice of the Supreme Court, a President of the United States, 3 prime ministers, CEOs and founders of Fortune 500 companies, high-ranking U.S. diplomats, foreign central bankers, scholars in academia, literary and media figures, numerous Emmy, Oscar, and Grammy award winners, and professional athletes. Other notable alumni include 40 Rhodes Scholars, 17 Marshall Scholarship winners, and numerous Watson Fellows, Schwarzman Scholars, Knight-Hennessy Scholars, Goldwater Scholars, Truman Scholars, and Fulbright scholarship recipients.
Read more or edit on Wikipedia