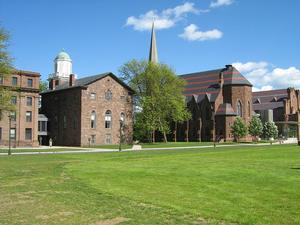 Wesleyan University ( (listen) WESS-lee-ən) is a private liberal arts university in Middletown, Connecticut. Founded in 1831 as a men's college under the auspices of the Methodist Episcopal Church and with the support of prominent residents of Middletown, the college was the first institution of higher education to be named after John Wesley, the founder of Methodism. It is now a secular institution. The college accepted female applicants from 1872 to 1909, but did not become fully co-educational until 1970. Before full co-education, Wesleyan alumni and other supporters of women's education established Connecticut College for women in 1912. Wesleyan, along with Amherst and Williams colleges, is part of "The Little Three", also traditionally referred to as the Little Ivies. Its teams compete athletically as a member of the NESCAC. Wesleyan University has distinguished alumni in the arts and sciences, literature, politics and government, business, journalism, and academia. Its alumni include 13 Pulitzer Prize winners, 14 Rhodes scholars, three Truman scholars, three Guggenheim fellows, 156 Fulbright scholars, and seven MacArthur fellows. Additionally, four Nobel laureates have been associated with the university as faculty members. Among its prominent alumni are politicians and political appointees: 34 members of the United States Congress, 16 presidential cabinet members, 11 governors, six directors and heads of U.S. federal agencies, two attorneys general of the United States, and one Associate Supreme Court Justice. Its alumni have also been successful in business, including several CEOs and founders of Fortune 500 companies.
Read more or edit on Wikipedia