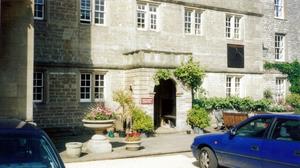 Downside School is a co-educational Catholic independent boarding and day school for children aged 11 to 18. It is located in south-west England, in Stratton-on-the-Fosse, between Bath, Frome, Wells and Bruton, and is attached to Downside Abbey. Originally a school for English Catholic boys, it was established in 1617 by English and Welsh monks, living in exile at Douai, France. The monastic community returned to England in 1795, with both the community and its school initially housed in the Shropshire home of Sir Edward Smythe, a former pupil. By 1814, the abbey and school had been re-established at its present site, in Somerset. Downside School became fully co-educational in all year groups in 2005.
Read more or edit on Wikipedia