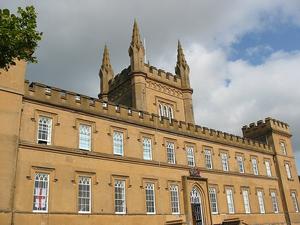 independent school in the town of St Peter Port, Guernsey

The Royal College of Elizabeth, better known as Elizabeth College, is a co-educational independent school in Saint Peter Port, Guernsey. One of the earliest members of the Headmasters' and Headmistresses' Conference (HMC), it is a public school in the British sense of the term. Founded on 25 May 1563 by royal charter from Queen Elizabeth I, the school is one of the oldest in the British Isles and is the oldest public school in the Channel Islands. The school endured a difficult two and a half centuries after its foundation, with several principals being dismissed or resigning following disputes with the local authorities. In 1824, it was re-chartered with new staff and an improved curriculum to attract fee-paying pupils from England. During the German occupation of the Channel Islands, the school was evacuated to Great Hucklow, Derbyshire. Having been a boarding school since its foundation, the decline in the number of children admitted as boarders following the world war period meant the school became a day school in 1996. The school became co-educational in 2021. The school teaches around 500 pupils aged 11 to 18. As a selective school, prospective pupils must pass an entrance exam to be offered a place, although the school accepts pupils from a wide ability range. The school charges £4,324 per term, with three terms per academic year, as of 2021/2022. There is an associated junior school for ages 2½ to 11 on adjoining sites at the nearby Acorn House (pre-school), in King's Road, and Beechwood (primary school), in Queen's Road. Alumni of the school are known as Old Elizabethans and, since 1824, pupils have each been allocated a unique, sequential school number. Among these alumni are multiple Olympians, several Bailiffs of Guernsey and a number of notable persons in various fields including the arts, sports and academia. Noted for producing students who would later join military colleges in the United Kingdom, the school has produced four Victoria Cross recipients.
Read more or edit on Wikipedia