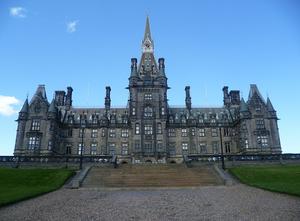 Fettes College is a co-educational independent boarding and day school in Edinburgh, Scotland, with over two-thirds of its pupils in residence on campus. The school was originally a boarding school for boys only and became co-ed in 1983. In 1978 the College had a nine-hole golf course, an ice-skating rink used in winter for ice hockey and in summer as an outdoor swimming pool, a cross-country running track and a rifle shooting range within the forested 300-acre grounds. Fettes is sometimes referred to as a public school, although that term was traditionally used in Scotland for state schools. The school was founded with a bequest of Sir William Fettes in 1870 and started admitting girls in 1970. It follows the English rather than Scottish education system and has nine houses. The main building was designed by David Bryce.
Read more or edit on Wikipedia