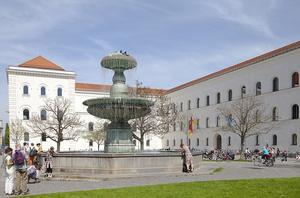 The Ludwig Maximilian University of Munich (simply University of Munich or LMU; German: Ludwig-Maximilians-Universität München) is a public research university in Munich, Germany. It is Germany's sixth-oldest university in continuous operation.Originally established in Ingolstadt in 1472 by Duke Ludwig IX of Bavaria-Landshut, the university was moved in 1800 to Landshut by King Maximilian I of Bavaria when the city was threatened by the French, before being relocated to its present-day location in Munich in 1826 by King Ludwig I of Bavaria. In 1802, the university was officially named Ludwig-Maximilians-Universität by King Maximilian I of Bavaria in honor of himself and Ludwig IX.LMU is currently the second-largest university in Germany in terms of student population; in the 2018/19 winter semester, the university had a total of 51,606 matriculated students. Of these, 9,424 were freshmen while international students totalled 8,875 or approximately 17% of the student population. As for operating budget, the university records in 2018 a total of 734,9 million euros in funding without the university hospital; with the university hospital, the university has a total funding amounting to approximately 1.94 billion euros.As of 2020, the University of Munich is associated with 43 Nobel laureates. Among these were Wilhelm Röntgen, Max Planck, Werner Heisenberg, Otto Hahn and Thomas Mann. Notable alumni, faculty and researchers include Pope Benedict XVI, Rudolf Peierls, Josef Mengele, Richard Strauss, Walter Benjamin, Joseph Campbell, Muhammad Iqbal, Marie Stopes, Wolfgang Pauli, Bertolt Brecht, Max Horkheimer, Karl Loewenstein, Carl Schmitt, Gustav Radbruch, Ernst Cassirer, Ernst Bloch and Konrad Adenauer. LMU has recently been conferred the title of "University of Excellence" under the German Universities Excellence Initiative, and is a member of U15 as well as the LERU. In university rankings, the university is consistently placed among the best universities in Germany.
Read more or edit on Wikipedia