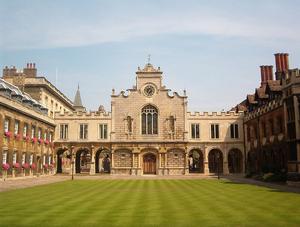 college of the University of Cambridge

Peterhouse is the oldest constituent college of the University of Cambridge in England, founded in 1284 by Hugh de Balsham, Bishop of Ely. Today, Peterhouse has 254 undergraduates, 116 full-time graduate students and 54 fellows. It is quite often erroneously referred to as Peterhouse College, although the correct name is simply Peterhouse. Peterhouse alumni are notably eminent within the natural sciences, including scientists Lord Kelvin, Henry Cavendish, Charles Babbage, James Clerk Maxwell, James Dewar, Frank Whittle, and five Nobel prize winners in science: Sir John Kendrew, Sir Aaron Klug, Archer Martin, Max Perutz, and Michael Levitt. Peterhouse alumni also include the Archbishop of Canterbury John Whitgift, Lord Chancellors, Lord Chief Justices, as well as Oscar-winning film director Sam Mendes, and comedian David Mitchell. British Prime Minister Augustus FitzRoy, 3rd Duke of Grafton, and Elijah Mudenda, second prime minister of Zambia, also studied at the college. Peterhouse is one of the wealthiest and most traditional colleges in Cambridge, with assets exceeding £320 million. It is one of the few Oxbridge colleges that still seeks to insist that its members attend communal dinners, known as "Hall". Hall takes place in two sittings, with the second known as "Formal Hall", which consists of a three-course candlelit meal and which must be attended wearing suits and gowns. At Formal Hall, the students rise as the fellows proceed in, a gong is rung, and two Latin graces are read. Peterhouse also hosts a biennial white-tie ball as part of May Week celebrations. In recent years, Peterhouse has been ranked as one of the highest achieving colleges in Cambridge, although academic performance tends to vary year to year due to its small population. In the past five years, it has sat in the top ten of the 29 colleges within the Tompkins Table. Peterhouse sat at fourth in 2018 and 2019.
Read more or edit on Wikipedia