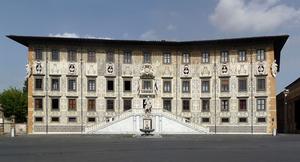 The Scuola Normale Superiore (commonly known in Italy as "la Normale") is a university institution of higher education based in Pisa and Florence, Tuscany, Italy, currently attended by about 600 undergraduate and postgraduate (PhD) students. It was founded in 1810 with a decree by Napoleon as a branch of the École Normale Supérieure in Paris, with the aim of training the teachers of the Empire to educate its citizens according to educational and methodological "norms". Eminent personalities from the world of science, literature and politics have studied at the Normale, among them Giosuè Carducci, Carlo Rubbia, Enrico Fermi and Carlo Azeglio Ciampi, Giovanni Gronchi, Giovanni Gentile, Massimo D'Alema as well as Alessio Figalli, in more recent times. In 2013 the Florentine site was added to the historical site in Pisa, following the inclusion of the Institute of Human Sciences in Florence (SUM). Since 2018 the Scuola Normale Superiore has been federated with the Sant'Anna School of Advanced Studies in Pisa and with the Institute for Advanced Studies of Pavia, the only other two university institutions with special status that, in the Italian panorama, offer, in accordance with standards of excellence, both undergraduate and postgraduate educational activities. It ranks first in Italy in the Per Capita Performance parameter of the "Academic Ranking of World Universities" (ARWU 2018), second among Italian universities in the "Times Higher Education World University Rankings 2019", and first in Italy in the Teaching parameter.
Read more or edit on Wikipedia