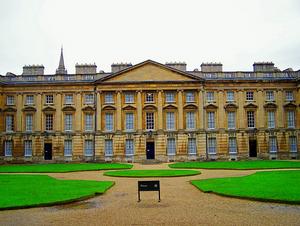 constituent college of the University of Oxford in England

Christ Church (Latin: Ædes Christi, the temple or house, ædēs, of Christ, and thus sometimes known as "The House") is a constituent college of the University of Oxford in England. Christ Church is a joint foundation of the college and the cathedral of the Oxford diocese (Christ Church Cathedral and its cathedral school), which serves as the college chapel and whose dean is ex officio the college head.Founded in 1546 by King Henry VIII, it is one of the larger colleges of the University of Oxford with 629 students in 2016. It is also among the wealthiest colleges with an endowment of £577.6m as of 2019. Christ Church has a number of architecturally significant buildings including Tom Tower (designed by Sir Christopher Wren), Tom Quad (the largest quadrangle in Oxford), and the Great Dining Hall which was also the seat of the parliament assembled by King Charles I during the English Civil War. The buildings have inspired replicas throughout the world in addition to being featured in films such as Harry Potter and The Golden Compass. This has helped Christ Church become the most popular Oxford college for tourists with almost half a million visitors annually.Christ Church has produced 13 British prime ministers out of the 28 educated at Oxford (the highest number of any college at Oxford or Cambridge). Other notable alumni include King Edward VII, King William II of the Netherlands, seventeen Archbishops, writers Lewis Carroll (Alice in Wonderland) and W. H. Auden, philosopher John Locke, and scientist Robert Hooke. Christ Church is also partly responsible for the creation of University College Reading, which later gained its own Royal Charter and became the University of Reading. The first female undergraduates matriculated at Christ Church in 1980.
Read more or edit on Wikipedia