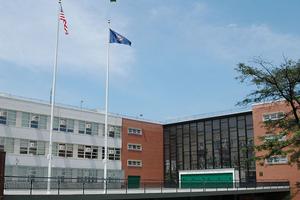 The Bronx High School of Science

The Bronx High School of Science (commonly called Bronx Science or Science, and formerly Science High) is a public magnet, specialized high school in New York City, New York, United States. It is operated by the New York City Department of Education. Admission to Bronx Science involves passing the Specialized High Schools Admissions Test. Each November, about 30,000 eighth and ninth graders take the three-hour test for admittance to eight of the nine specialized high schools. The test is extremely competitive, with only 800 of the 30,000 applicants being accepted to Bronx Science each year. Founded in 1938 in the Bronx, New York City, Bronx Science is now situated in an educational area known as the Educational Mile in Bedford Park, a neighborhood in the northwest portion of the Bronx. The exam administered to students in the 8th grade was reportedly taken by more than 20,000 students every year as of 1999. Although originally known for its focus on mathematics and science, Bronx Science also emphasizes the humanities and social sciences and continually attracts students with a wide variety of interests beyond math and science. With eight Nobel Prize-winning alumni, seven in physics and one in chemistry, it is the secondary school that has produced the most Nobel laureates in science worldwide. The Lycée Louis-le-Grand in France has also produced eight Nobel Prize winners, but only four are for science (two for physics, one each for medicine and economics). Bronx Science alumni have also won two Turing Awards, sometimes unofficially referred to as the Nobel Prize in computer science; six National Medals of Science, the nation's highest scientific honor; and eight Pulitzer Prizes.
Read more or edit on Wikipedia