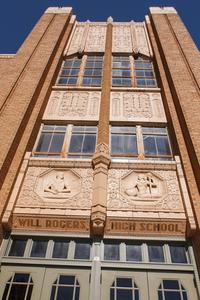 Will Rogers Junior High and High School, located at 3909 E. 5th Place in Tulsa, Oklahoma, was built by Tulsa Public Schools in 1939 using WPA workers and designed by Joseph R. Koberling, Jr. and Leon B. Senter. It was named for the humorist Will Rogers, who died in 1935, along with Wiley Post in a plane crash. Significant additions were made to the original structure in 1949 and 1964. The alterations were in keeping with the original design and did not detract from the school's architectural or historical significance. It has been called "... one of the best examples of Art Deco high school architecture...in the United States.The school had approximately 1,000 students as of 2008, and more than 39,000 alumni.
Read more or edit on Wikipedia