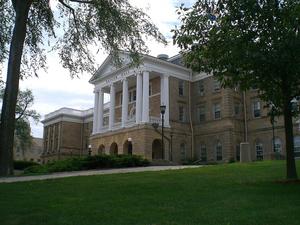 The University of Wisconsin–Madison (University of Wisconsin, Wisconsin, UW, UW–Madison, or simply Madison) is a public land-grant research university in Madison, Wisconsin. Founded when Wisconsin achieved statehood in 1848, UW–Madison is the official state university of Wisconsin and the flagship campus of the University of Wisconsin System. It was the first public university established in Wisconsin and remains the oldest and largest public university in the state. It became a land-grant institution in 1866. The 933-acre (378 ha) main campus, located on the shores of Lake Mendota, includes four National Historic Landmarks. The university also owns and operates the 1,200-acre (486 ha) University of Wisconsin–Madison Arboretum, located 4 miles (6.4 km) south of the main campus, which is also a National Historic Landmark.UW–Madison is organized into 20 schools and colleges, which enrolled 33,506 undergraduate, 9,772 graduate, 1,968 special, and 2,686 professional students in 2021. Its academic programs include 136 undergraduate majors, 148 master's degree programs, and 120 doctoral programs. A major contributor to Wisconsin's economy, the university is the largest employer in the state, with over 24,232 faculty and staff.Wisconsin is one of the twelve founding members of the Association of American Universities, a selective group of major research universities in North America. It is considered a Public Ivy, and is classified as an R1 University, meaning that it engages in a very high level of research activity. In 2018, it had research and development expenditures of $1.2 billion, the eighth-highest among universities in the U.S. As of March 2020, 26 Nobel laureates, 2 Fields medalists and 1 Turing award winner have been associated with UW–Madison as alumni, faculty, or researchers. Additionally, as of November 2018, the current CEOs of 14 Fortune 500 companies have attended UW–Madison, the most of any university in the United States.Among the scientific advances made at UW–Madison are the single-grain experiment, the discovery of vitamins A and B by Elmer McCollum and Marguerite Davis, the development of the anticoagulant medication warfarin by Karl Paul Link, the first chemical synthesis of a gene by Har Gobind Khorana, the discovery of the retroviral enzyme reverse transcriptase by Howard Temin, and the first synthesis of human embryonic stem cells by James Thomson. UW–Madison was also the home of both the prominent "Wisconsin School" of economics and of diplomatic history, while UW–Madison professor Aldo Leopold played an important role in the development of modern environmental science and conservationism.The Wisconsin Badgers compete in 25 intercollegiate sports in the NCAA Division I Big Ten Conference and have won 31 national championships. Wisconsin students and alumni have won 50 Olympic medals (including 13 gold medals).
Read more or edit on Wikipedia