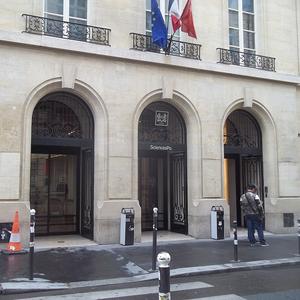 French university based in Paris

The Paris Institute of Political Studies (French: Institut d'études politiques de Paris), commonly referred to as Sciences Po Paris or just Sciences Po (IPA: [sjɑ̃s po]), is a grande école and grand établissement located in Paris and other cities in France. It originates in the "École libre des sciences politiques", a private school founded in Paris in 1872 by Émile Boutmy. Boutmy aimed at modernizing the education of political elites in France by teaching them contemporary history rather than classical studies, which they would learn in universities at the same time. It acquired an important role in France's public service system and many members of the French public service have studied at the institution on top of primary studies they undertook in universities. The school was re-founded in 1945 as a semi-public "institute", after criticism of the attitude of its staff during WW2 and calls for its closure. Since the mid-1990s, under the semi-formal leadership of Olivier Duhamel, Sciences Po has been substantially reformed to broaden its focus and to prepare students for the private sector too, to diversify and internationalize its student body and curriculum and therefore to welcome students as their primary higher education institution. The Sciences Po curriculum now incorporates courses in additional social sciences such as sociology, economics, and law, even though political science and history stay its main taught subjects. Sciences Po also expanded outside Paris by establishing additional campuses in Dijon, Le Havre, Menton, Nancy, Poitiers, and Reims. During that time, the institute was hit by a number of controversies that culminated in a crisis in 2021. The institute is a member of the Association of Professional Schools of International Affairs (APSIA) and the Sorbonne Paris Cité group.
Read more or edit on Wikipedia