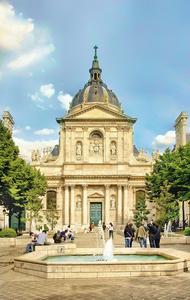 French university located at the heart of the Latin Quarter, in Paris

University of Paris 1 Panthéon-Sorbonne (French: Université Paris 1 Panthéon-Sorbonne), also known as Paris 1 or Panthéon-Sorbonne University, is a public research university located in Paris, France. It was created in 1971 from two faculties of the historic University of Paris – colloquially referred to as the Sorbonne – after the May of 1968, which resulted in the division of one of the world's oldest universities. It is the main inheritor of the Sorbonne in Economics – which did not have its own faculty – since most of its professors in economics were founding members of this university, with professors of the faculty of arts and a few professors of law.Panthéon-Sorbonne has three main domains: Economic and Management Sciences, Human Sciences, and Legal and Political Sciences; comprising several subjects such as: Economics, Law, Philosophy, Geography, Humanities, Cinema, Plastic arts, Art history, Political science, Mathematics, Management, and Social sciences.The current name of the university refers to its two symbolic buildings: the Sorbonne and the Panthéon (Saint-Jacques part). Pantheon-Sorbonne's headquarters is located on the Place du Panthéon in the Latin Quarter, an area in the 5th and the 6th arrondissements of Paris. The university also occupies part of the historical Sorbonne campus. Overall, its campus includes over 25 buildings in Paris, such as the Centre Pierre Mendès France ("Tolbiac"), the Maison des Sciences Économiques, among others.Panthéon-Sorbonne was globally ranked 287th (9th of France) in the 2021 QS World University Rankings and 601-800th (32nd of France) in the 2020 The Times Higher Education. It was also ranked by the 2019 QS Rankings by Subject as being 1st in France in Archaeology, History, Law, and Economics. In the French Eduniversal rankings, it is ranked 2nd of France in Economics and 2nd in Law.
Read more or edit on Wikipedia