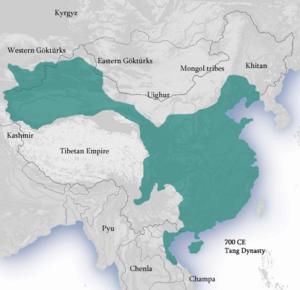 The Tang dynasty (, [tʰǎŋ]; Chinese: 唐朝), or Tang Empire, was an imperial dynasty of China that ruled from 618 to 907 AD, with an interregnum between 690 and 705. It was preceded by the Sui dynasty and followed by the Five Dynasties and Ten Kingdoms period. Historians generally regard the Tang as a high point in Chinese civilization, and a golden age of cosmopolitan culture. Tang territory, acquired through the military campaigns of its early rulers, rivaled that of the Han dynasty. The Lǐ family (李) founded the dynasty, seizing power during the decline and collapse of the Sui Empire and inaugurating a period of progress and stability in the first half of the dynasty's rule. The dynasty was formally interrupted during 690–705 when Empress Wu Zetian seized the throne, proclaiming the Wu Zhou dynasty and becoming the only legitimate Chinese empress regnant. The devastating An Lushan Rebellion (755–763) shook the nation and led to the decline of central authority in the dynasty's latter half. Like the previous Sui dynasty, the Tang maintained a civil-service system by recruiting scholar-officials through standardized examinations and recommendations to office. The rise of regional military governors known as jiedushi during the 9th century undermined this civil order. The dynasty and central government went into decline by the latter half of the 9th century; agrarian rebellions resulted in mass population loss and displacement, widespread poverty, and further government dysfunction that ultimately ended the dynasty in 907. The Tang capital at Chang'an (present-day Xi'an) was then the world's most populous city. Two censuses of the 7th and 8th centuries estimated the empire's population at about 50 million people, which grew to an estimated 80 million by the dynasty's end. From its numerous subjects, the dynasty raised professional and conscripted armies of hundreds of thousands of troops to contend with nomadic powers for control of Inner Asia and the lucrative trade-routes along the Silk Road. Far-flung kingdoms and states paid tribute to the Tang court, while the Tang also indirectly controlled several regions through a protectorate system. In addition to its political hegemony, the Tang exerted a powerful cultural influence over neighboring East Asian nations such as Japan and Korea. Chinese culture flourished and further matured during the Tang era. It is traditionally considered the greatest age for Chinese poetry. Two of China's most famous poets, Li Bai and Du Fu, belonged to this age, contributing with poets such as Wang Wei to the monumental Three Hundred Tang Poems. Many famous painters such as Han Gan, Zhang Xuan, and Zhou Fang were active, while Chinese court music flourished with instruments such as the popular pipa. Tang scholars compiled a rich variety of historical literature, as well as encyclopedias and geographical works. Notable innovations included the development of woodblock printing. Buddhism became a major influence in Chinese culture, with native Chinese sects gaining prominence. However, in the 840s, Emperor Wuzong enacted policies to suppress Buddhism, which subsequently declined in influence.
Read more or edit on Wikipedia