Musicology (from Greek 'μουσική' (mousikē) for 'music' and 'λογος' (logos) for 'domain of study') is the scholarly analysis and research-based study of music. Musicology departments traditionally belong to the humanities, although some music research is scientific in focus (psychological, sociological, acoustical, neurological, computational). Some geographers and anthropologists have an interest in musicology so the social sciences also have an academic interest. A scholar who participates in musical research is a musicologist.Musicology traditionally is divided in three main branches: historical musicology, systematic musicology and ethnomusicology. Historical musicologists mostly study the history of the so-called Western classical tradition, though the study of music history need not be limited to that. Ethnomusicologists draw from anthropology (particularly field research) to understand how and why people make music. Systematic musicology includes music theory, aesthetics, pedagogy, musical acoustics, the science and technology of musical instruments, and the musical implications of physiology, psychology, sociology, philosophy and computing. Cognitive musicology is the set of phenomena surrounding the cognitive modeling of music. When musicologists carry out research using computers, their research often falls under the field of computational musicology. Music therapy is a specialized form of applied musicology which is sometimes considered more closely affiliated with health fields, and other times regarded as part of musicology proper.
Read more or edit on Wikipedia 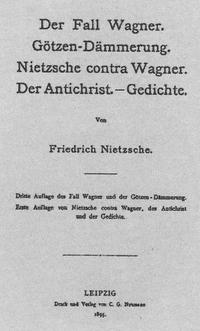 The Case of Wagner