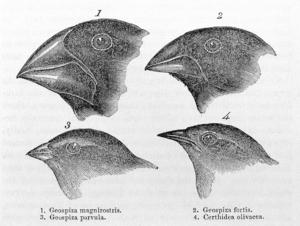 Evolutionary biology is the subfield of biology that studies the evolutionary processes (natural selection, common descent, speciation) that produced the diversity of life on Earth. Simply, it is also defined as the study of the history of life forms on Earth. Evolution is based on the theory that all species are related and they gradually change over time. In a population, the genetic variations affect the physical characteristics i.e. phenotypes of an organism. These changes in the phenotypes will be an advantage to some organisms, which will then be passed onto their offspring. Peppered Moth and Flightless birds are some examples of evolution in species over many generations. In the 1930s, the discipline of evolutionary biology emerged through what Julian Huxley called the modern synthesis of understanding, from previously unrelated fields of biological research, such as genetics and ecology, systematics, and paleontology. A person who studies Evolutionary biology is called an Evolutionary biologist. The importance of studying Evolutionary biology is mainly to understand the principles behind the origin and extinction of species.The investigational range of current research widened to encompass the genetic architecture of adaptation, molecular evolution, and the different forces that contribute to evolution, such as sexual selection, genetic drift, and biogeography. Moreover, the newer field of evolutionary developmental biology ("evo-devo") investigates how embryogenesis, the development of the embryo, is controlled, thus yielding a wider synthesis that integrates developmental biology with the fields of study covered by the earlier evolutionary synthesis.
Read more or edit on Wikipedia