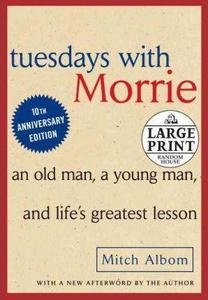 Tuesdays with Morrie is a memoir by American author Mitch Albom about a series of visits Albom made to his former sociology professor Morrie Schwartz, as Schwartz gradually dies of ALS. The book topped the New York Times Non-Fiction Bestsellers of 2000. An unabridged audiobook was also published, narrated by Albom. The appendix of the audiobook contains several minutes of excerpts from audio recordings that Albom made in his conversations with Schwartz before writing the book. A new edition with an afterword by Albom was released on the book's ten-year anniversary in 2007.
Read more or edit on Wikipedia