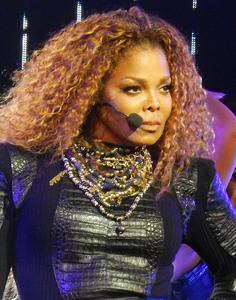 Janet Damita Jo Jackson (born May 16, 1966) is an American singer, songwriter, actress, and dancer. She is noted for her innovative, socially conscious and sexually provocative records, as well as elaborate stage shows. Her sound and choreography became a catalyst in the growth of MTV, enabling her to rise to prominence while breaking gender and racial barriers in the process. Lyrical content which focused on social issues set her reputation as a role model for youth. The tenth and youngest child of the Jackson family, she began her career with the variety television series The Jacksons in 1976 and went on to appear in other television shows throughout the 1970s and early 1980s, including Good Times, Diff'rent Strokes, and Fame. After signing a recording contract with A&M Records in 1982, she became a pop icon following the release of her third and fourth studio albums Control (1986) and Rhythm Nation 1814 (1989). Her collaborations with record producers Jimmy Jam and Terry Lewis incorporated elements of rhythm and blues, funk, disco, rap, and industrial beats, which led to crossover success in popular music. In 1991, Jackson signed the first of two record-breaking multimillion-dollar contracts with Virgin Records, establishing her as one of the highest-paid artists in the industry. Prior to her first studio project with Virgin, she appeared in her first of several lead film roles in Poetic Justice (1993). Her two studio albums which followed, Janet (1993) and The Velvet Rope (1997), saw her develop a public image as a sex symbol. These records, along with their promotional music videos and live performances in concert tours, branded Jackson as one of the world's most erotic performers, garnering both criticism and praise. By the end of the 1990s, she was named by Billboard magazine as the second most successful recording artist of the decade after Mariah Carey. The release of her seventh studio album All for You in 2001 coincided with a celebration of her impact on the recording industry as the subject of the inaugural MTV Icon special.The backlash from the 2004 Super Bowl XXXVIII halftime show controversy resulted in an industry blacklisting under the direction of Les Moonves, then-CEO of CBS Corporation. Jackson subsequently experienced reduced radio airplay, televised promotion and sales figures from that point forward. After parting ways with Virgin Records, she released her tenth studio album Discipline (2008), her first and only album with Island Records. In 2015, she partnered with BMG Rights Management to launch her own record label, Rhythm Nation and released her eleventh studio album Unbreakable the same year. Since then she has continued to release music as an independent artist. Having sold over 100 million records, Jackson is one of the world's best-selling music artists. She has amassed an extensive catalog, with singles such as "Nasty", "Rhythm Nation", "That's the Way Love Goes", "Together Again", and "All for You"; she holds the record for the most consecutive top-ten entries on the US Billboard Hot 100 singles chart with 18. She is also the only artist in the history of the chart to have seven commercial singles from one album (Rhythm Nation 1814) peak within the top five positions. In 2008, Billboard placed her number seven on its list of the Hot 100 All-Time Top Artists, and in 2010 ranked her fifth among the "Top 50 R&B/Hip-Hop Artists of the Past 25 Years". In December 2016, the magazine named her the second most successful dance club artist after Madonna. One of the world's most awarded artists, her accolades include five Grammy Awards, eleven Billboard Music Awards, eleven American Music Awards, a star on the Hollywood Walk of Fame, and eight Guinness World Records entries. In 2019, she was inducted to the Rock and Roll Hall of Fame. Jackson has been cited as an inspiration among numerous performers and credited with elevating a standard of sound, showmanship and sex appeal expected of pop stars.
Read more or edit on Wikipedia