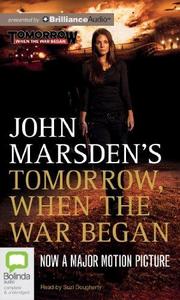 Tomorrow, When the War Began

Tomorrow, When the War Began is the first book in the Tomorrow series by John Marsden. It was published in 1993, and is a young adult invasion novel, detailing a high-intensity invasion and occupation of Australia by a foreign power. The novel is told in first person perspective by the main character, a teenage girl named Ellie Linton, who is part of a small band of teenagers waging a guerrilla war on the enemy garrison in their fictional home town of Wirrawee. Tomorrow, When the War Began was adapted into a feature film of the same name that was released on 2 September 2010 in Australia and New Zealand. It was written and directed by Stuart Beattie, and starred Caitlin Stasey in the role of Ellie Linton.
Read more or edit on Wikipedia

The Creation of Tomorrow

The Land Where the Blues Began

Tomorrow When the War Began

How the Cold War Began

When Nationalism Began to Hate

Since the World Began

When We Began, There Were Witchmen : An Oral History from Mount Kenya

When the World Seemed New: George H. W. Bush and the End of the Cold War