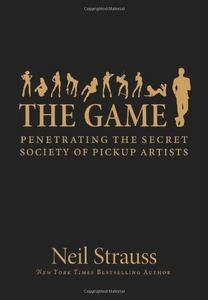 The Game: Penetrating the Secret Society of Pickup Artists

The Game: Penetrating the Secret Society of Pickup Artists (also known as The Game: Undercover in the Secret Society of Pickup Artists) is a non-fiction book written by investigative reporter Neil Strauss as a chronicle of his journey and encounters in the seduction community. The book was featured on The New York Times Bestseller List for two months after its release in September 2005, reaching prominence again in 2007 during the broadcast of the VH1 television series The Pickup Artist, which was hosted by Mystery, Strauss's mentor in the book. In its original published hardcover format, the book was covered in black leather and bookmarked with red satin, similar to some printings of the Bible. Despite the reputation that The Game has gained as an exposé on the seduction community, it was primarily written as an autobiographical work. The follow-up book, Rules of the Game, relies more on the how-to side of seduction and dating.
Read more or edit on Wikipedia